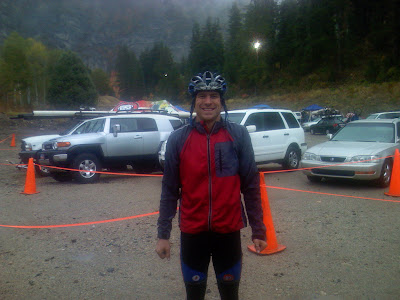 The 12 Hours of Sundance was back in September. I'm just now posting the blog:

So the two best things about riding bikes is racing, and spending time with good friends. Naturally then the 12 Hours of Sundance mountain bike team relay race would be the perfect event. When I heard about the race I called up my best buddy Kyle (who has since lost a few points in the friendship ranking scale due to the fact that he totally sold me out and got married this last summer) Our conversation went something like this:
Kyle: Hey
Dan: Hey
Kyle: What do you want, I'm really busy doing a 3-D puzzle with my wife
Dan: There's a bike race next week.
Kyle: I remember when we used to do those. I do 3-D puzzles now with my wife.
Dan: So I've heard. Anyway, it's a 12 hour race. Let's do a 2 man team
Kyle: Sounds good, but I think I might be a bit out of shape, these puzzles don't seem to keep me in shape like cycling did.
Dan: So I've heard. Anyway remember, Kyle, how your bike handling skills make you twice as fast as me even when I am in better shape?
Kyle: Oh yeah. Let's do it. I'll bring SlimFast for us to drink.
Dan: Deal.

And so we embarked on the adventure known as the 12 Hours of Sundance. We were both so excited for the race that we all camped out the night before. Anwyay, so here's how the race worked:
Each team would have one rider out racing the loop at any given time. The course was a 8 mile loop that took 40 minutes or so to ride. A rider could do as many laps as they liked before switching the baton off to their teammate. Kyle and I after much discussion decided that between his out of shapeness and my lack of mountain biking skills, one lap each would be just fine. And so we went, alternating laps, and having a darn good time. The only problem was that as excited as I was to race bikes with Kyle, the only time I saw him was for 10 seconds at a time as he would come in to finish his lap, and I would go off to start mine in the transition zone. Granted, we did maximize those short moments of social interaction with such stimulating conversation topics as how bad my back hurt, or how cold Kyle's face was, but it really wasn't the same as a good old sit back and relax conversation over a cold glass of Gatorade like we used to.

Now here's where the real drama starts. The race was planned to start at 7:00 am and go till 7:00 pm, with each team doing as many laps as they could in the given time. Well a little after noon, it started to rain, which is fine in a mountain bike race. In fact, a bit of weather makes racing off road a bit more fun (and by a bit of weather I am not including blizzards like the one Sam and I encountered that one time we rode LOTOJA in 2005) Either way, the rain was off and on for a few hours until finally around 3:00 pm, it started raining so hard the trail became a mess of mud thicker and stickier than the stuff they called beans in the MTC. The mud became so bad bikes would no longer roll. Riders were having to get off and run not only up but down some of the hills, truly defeating the whole purpose of it being a bike race. (for those interested in Muddy Foot Races with a Bike on Your Back, check out www.muddyfootraceswithabikeonyourback.com, but they really aren't as fun as good old mountain bike races)

So anyway, with the mud getting worse, and the temperature dropping, I feel it appropriate to point out that I had the the insanely good fortune to be in the tent resting while the weather was weathering. Don't think I am a jerk, but I was quite glad Kyle was the one out in the 6 foot mud waves, not because I dislike Kyle, but because it meant I wasn't out in it. Before you give up on me as a friend, I'll have you know that as we waited for Kyle to come back from his muddy lap, I was busy getting the car heater on, laying out dry clothes for Kyle to put on, and heating up some hot chocolate for him to sip as he nuzzled up with his wife in the tent. Yeah, mark up 23 friend points for Dan.

Well, while this is all going on, the race organizers decided to cancel the race. A few folks were upset, but I'd be willing to bet the fancy 3rd place medals Kyle and I won they weren't the people who had to ride in the mud. So after 4:00 pm, no more riders were allowed to go out, 3 hours short of the 12 hours mark, making it the 9 Hours of Sundance.
Kyle and I ended up in 3rd place getting beat my 2 teams of guys who all race pro, so we felt pretty good about that. In fact, here is a picture of the medal:
What better background than Old Glory and the bike stand in my living room. 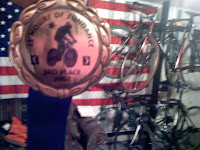 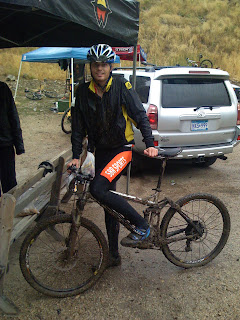 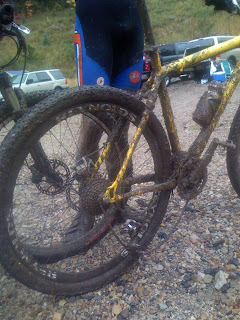 Here is a picture of Kyle after he got back from the mud lap: Notice how happy he is despite the fact he just hiked most of the lap through mud 84 feet deep.
-Below to the left is a picture of our good buddy Chad's bike. He managed to rip his derailleur clean off the hanger due to the deadly combination of excess mud build up, and ridiculously strong leg power.

-Up top is a picture of me, waiting so patiently all bundled up to go ride my lap.
-Finally a pict 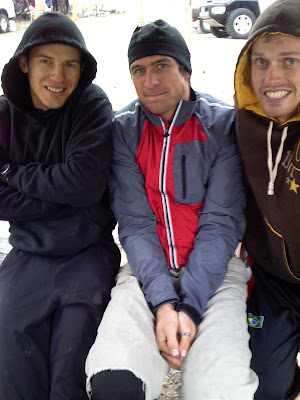 ure of Aaron, me, and Kyle after the race.