Well, its that time again. Its been a month or two, so it must be time to update the blog. Especially after getting called out by The KC Holley for not updating it.

First off, the retirement thing didn't last too long. I figured that between trying to get into a PhD program and dating a girl I wouldn't have time to train or race. So I retired. Well I didn't get into any grad schools and the girl turned out to be crazy (yes, she dumped me). So here I am. Right back where I started. Right where I've been the last 3 years of my life. In school. No direction. In love with riding bikes.

Apparently the 2 months off the bike didn't hurt too much. I came off last winter with well over 200 hours of base mileage ride time, but don't feel a whole lot slower this spring with a whopping total of 85 miles over the entire month of January. We'll see how this plays out once the later season endurance races start. I had relented to the fact that I would more than likely only be able to ride the Breck 68 this year, foregoing the more manly and much more expensive Breck 100 option. However, after becoming single and not getting into grad school this time around I found some extra time. And thanks to TurboTax for optimizing my return, I found some extra cash.

So back in the saddle it is.

I've been digging on the single speed lately. Mostly because my geared bike started crapping out on me, and I didn't feel like dishing out the monster cash to replace all my XX parts. So I went back to my roots and started riding the SIR9. Not a bad bike. Not bad at all. Granted even with a rigid fork it weighs as much as my front suspensioned Air9...but hey, weight isn't everything. And the best part is that single speed races are only an hour long. So nothing really even matters anyway. I mean if B. Tolbert can ride a full suspension single speed anything goes, right? 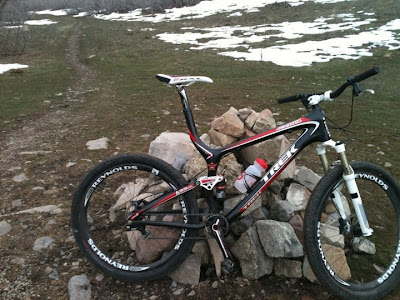 Well, back to "working on the thesis". I'll post some race updates soon enough.
Posted by Dan at 9:28 AM

i like that when boys get dumped, they can just say the girl was crazy and suddenly that makes them the victim