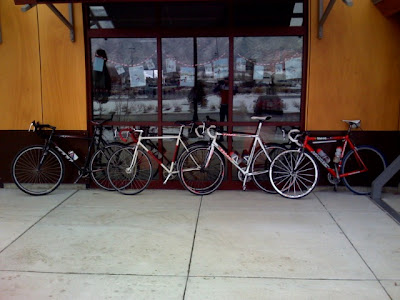 Saturdays were invented for cycling. Don't let any of those married people try and tell you they are for yard work, cleaning, or catching up on projects. Especially don't let anyone tell you they are for school work. Just as Sunday has been set aside as a day of rest and spiritual rejuvenation, Saturdays were built around the fact that the rest of the week gets cluttered with all the nonsense of life, and Saturday was dedicated to riding bicycles. Its true, I looked it up on the Internet.

With that clarified, I feel the need to self righteously brag to all you (ok so " to all of you" may be an overestimate, how about "to both of you") who read this that last year I only missed riding on 5 Saturdays out of the whole year. I feel justified in the fact that one missed day was due to the fact that I had had hand surgery two days prior and was so doped up on Loritab I couldn't figure out how to get my bike onto my indoor riding stand (but heaven knows I tried), another was due to a severe gluteal bruise from a wicked mt bike wreck (ok so I fell trying to impress someone on campus by riding up stairs and ended up falling back on my seat...hard....but man were they impressed). Another was missed due to (this one's the killer) a girl. Yeah, believe it or not, I actually skipped a Saturday ride to spend time with a girl. Every Achilles has his heel, and apparently girls were mine that week. Turns out I do have a soft side deep inside this hardened front I put on. I've since reformed.

As for the other 2 missed days I am pretty sure I was at home in WA during different weekends without a bike to ride or busy doing family things (which believe it or not actually ARE more important than cycling to me) Bikes are fun, but my mom, dad and brothers mean so much more.

Now I am pretty dang sure you wanted to know all of that. And that's good, cause i spent a whopping 5 minutes of my life typing it.

Now to this Saturdays ride. As cyclocross is now over, it's back to training on the road for the upcoming road season. First race is February 15-16, down in Phoenix. It's a big national stage race with people coming in from all over the country (hence the "national" in "national stage race") It is pretty early in the season, but possible to do well if you have a good off season. Which is what I am doing now, having a good off-season. Much better than last year's (due to a certain distraction we'll call "XX Chromosome," my off-season last year ended up being just that, off) Well since last winter some key events have taken place that bring me to where I am today. I got dumped, I got a new bike, I got bitter, I got faster. I guess that is all there is to it.

So, again, back to this Saturday's ride (I'm just as scatterbrained and random in my writing as I am in my real face to face conversations) It was cold. The temp in Provo was listed as 18 degrees according to Yahoo Weather when I woke up Sat morning (that's about 7 degrees Celsius for our international readers). I don't care who you are, that's cold. So I bundled up and took off to meet the guys. It's days like that that bring out the "Lifers", as Jason put it. We spun out for the West Mountain ride and ended up having a great time. Matt "Danish Blood" M. won the "I'm so tough I only wear one layer in the dead of December" award. What a champ. The rest of us were nicely bundled. 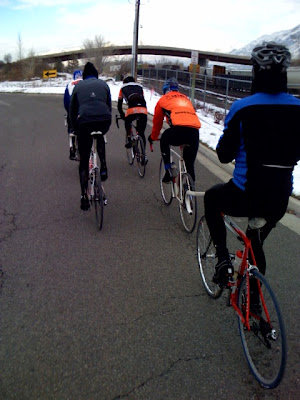 Bundled up like eskimos
We took a lunch in Payson and got home in the afternoon. Overall a great day on the bike. 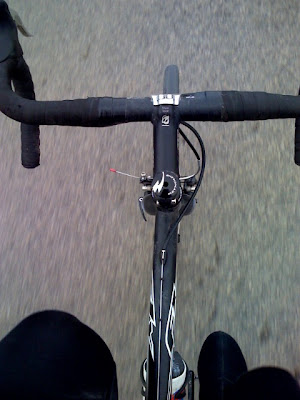 I figure that since this is what I get to stare at for most of the day, you should to. No, dad, I didn't take this picture while riding my bike...at least not through traffic.

Wow! What a year. And learning that you have spent a lifetime with brothers explains a whole lot about you Dan. ;)

Yup. But in all reality everything useful I know in life I could have learned as a girl if I just had a male RS President to explain the important things to me

yup. I did. I did grow up with all brothers. And you can make fun of us boys who are a little on the "manly" side, but in all reality, we're confident enough we don't care who makes fun of us

I never said anything about "manly" ... I'll tell you what I meant when you're older K? And I know you're confident. ;D

I didn't know you were part of the blogosphere.