2007. What a year. As I sit here and think back on the last year as it has gone by, I can't help but think how good it was. I got a few sweet new bikes, won a few races, went on an actual date with a girl, and even ended up the 4th ranked amateur in the nation. With that said, it probably could have been better.

DO: Train in the off season. I didn't. From Jan to March I don't think I got in a ride longer than and hour. I over trained in April to try to make up for it, which led to a great first half of the season, but a bad burnout mid-July.

DO: Take chances. This applies to all aspects of life. I recently watched a very lame movie with one really good line: "The things that scare us the most are what end up being the most worthwhile." I've never been a risk taker, but perhaps one of my greatest moments in my short history of racing was this summer at Bear Lake.

A small group of riders broke away at mile 20. There were still 80 miles left to race. Almost no chance to hold off the pack for that long. For the first time in my life I took a risk. I went off on the attack and to this day still don't know how, but a small group of 5 of us managed to hold off the peleton almost the entire race, never getting more than a few minutes lead. In the last 2 miles all but 2 of us were caught.

With only 1 kilometer to go, I took off, pumping every ounce of energy I had into my fatigued legs. I punched open a 20 second gap on second place, and went on the win the race. I've never been so excited in my life. Never worked so hard, and never felt better. The feeling of burning down the last 500 meters knowing I had held off a field of 50 riders will be one I will never forget. 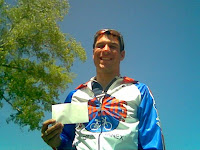 Prize money from the race
If I could only work that hard on getting married...

My lowest point this summer was after a race in Idaho. I went out on a few attacks too early, was quite a bit over confident in my ability, and pretty much baked my legs in the first 2 laps of a 4 lap race. As the 3rd lap started up the hill, I gave up. I gave myself every excuse in the book and rationalized my way into not trying. I soon fell off the back of the pack and finished the race completely alone.

I was so far back they didn't even give me a time, just a "Did Not Finish" status on the results sheet. To my credit I did at least finish the race, but I gave up. I quit trying. And as bad as it hurt then pushing it up the hill, it hurts even worse now knowing I made the choice to quit.

Do: Keep your priorities straight. Contrary to popular belief, cycling is not the highest priority in my life. My family comes first. As bad as I want to someday reach pro status, I want even more to be a good brother, son, and eventual husband and father. I can't say I've always been the best at letting my actions reflect this, but the older I get, the more I see how important it is to spend time with my family.

As trips home get further apart and shorter in length, I can't help but wish I could be around them more. As much fun as cycling is, it should never come in front of religion or family. (Which is why I've put in a petition to start a new program called "Church on Wheels", ask me about it if you have any questions)

Don't: Get cocky. This one definitely does NOT apply to me. Seeing how I'm pretty much the fastest kid on a bike I don't have to worry at all. When you're the best, well, enough said. This tid-bid is for all you out there who think you are good, but not as good as me. It's important to note that no matter how you try, you just won't be as fast as I am, so don't think you ever will.

As a 16 year old kid passed me going up the final climb of the state championship race this summer, I told him this. He kinda laughed and gave me a cocky smile. As I was explaining this to another kid, the 17 year old who roasted me every race in cyclocross, he kinda laughed to and gave me the same cocky grin. If you wanna read all about it I am sure you can read their blog at
www.Im.a.young.kid.who.likes.to.whoop.up.on.26.year.old.insecure.idiots.com
Its actually pretty good.

Well with that said, I've made my New Year's resolutions. I'm off now to go beat up those teenagers to show them I'm better than them...
Posted by Dan at 8:12 PM

Tell me more about the Church on Wheels program. It sounds promising.

Your link is broken. You're not even on the list of the top 500. Maybe you got to renew your license or something. Don't worry too much though, you're still number one in my book.

yeah I noticed that too....

Been a while since the last update. I guess you've given up on cycling.