An Open Letter to My Loyal Readers

Note from the Author: This will be the first of many "Open Letters". I got the idea from a guy who knows how to blog better than us all...

Dear Loyal Fans,
I must begin this letter by first, honestly admitting I never knew you existed. Up until yesterday I really didn't even think my blog was read by anyone other than the Quality Control guy at blogger.com who has the lousy job of reading random blogs to make sure people aren't posting things they shouldn't, like immodest pictures of people in spandex biker shorts. 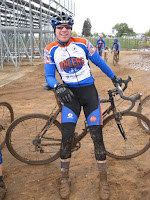 However, due to certain comments, I am now aware you exist. Thanks to "benson" (Who are you? Do I even know you?) and "austin" and their willingness to be heard, I now know that more than 3 people read this blog. Sure, as I write I imagine thousands upon thousands of people across the country are reading and appreciating my wit, epic bike stories, and random thoughts, and can't wait for more, but even I have a realistic enough approach to life to realize even my own mom won't read this unless I specifically tell her about a particular post. With that said, however many of you are out there, I thank you for being Loyal Readers.

Now, on with the update.

For all of you who are dying to know how many times I fell off the rollers while attempting to ride a TT bike on them, the answer is 0. Yes, zero. I didn't fall once. I would say the biggest reason why I didn't fall was because I haven't tried yet.

After bumping into a couple of Tri-Guys, (certainly a great group of guys, good friends from the shop, men I admire, but alas, they are after all Tri-Guys) they convinced me of how difficult it was to ride on rollers while down in the aero bars. Being the gung-ho go gettem kinda guy that I am, I decided I would try later, and just rode the TT bike on a fixed trainer. I'll post more on that later.

So with the first race only 28 days, 23 hours, 53 minutes away, I must admit for the first time, training is going great. I've been hitting my lifting goals, riding inside whenever the weather is bad, and have a good base under my legs. With that in mind, here are the bits of drama in my life as of now. For those who don't care, don't even bother to finish reading the post, there'll be nothing good after the boring stuff.

I've been homeless for the last week and a half. In an attempt to save a bit of money for new bike parts, I moved out of my old house way too soon. My new place won't be open until this upcoming weekend (or so we hope) bringing Dan's Total Homeless time to just over 2 weeks.

I shower at school, sleep on couches, and keep a change of clothing or two in my car. The best part of being a PE teacher here at BYU is that I can basically wear the same thing to school everyday, and no one says anything, bringing Dan's Total Changes in wardrobe to 3. Not bad for a 10 day span. (Mom, in case you are reading this, don't worry, I do change the unders everyday)

In case you didn't know, I had a girlfriend once. Yes, it's true. I've made mention a time or two on here about getting dumped last year, but it actually happened. You wonder why I bought a full carbon fiber bike with Dura-Ace parts worth more than my car last spring...it was my rebound. I got canned like an old diaper.

Don't worry. I'm not bitter anymore, but it sure did fuel me up more than a few steep hills last year. Time passes. Emotions fade. Pain subsides.

Now here is where it gets interesting. I've never been one to put anything personal on a blog, but hey why not give the blogger.com Quality Control guy something interesting to read tonight. This girl who canned me almost a year ago, has been calling again. We've hung out recently, and had a good time catching up and chatting, but lets be honest, to go from seriously dating, to nothing, back to buds is a bit to fathom. Austin, here's you chance to counsel...

So with that said, that is all I have to say. I've probably said too much, but hey, when has there ever been a time Dan didn't say too much. Yeah not ever, really.

Well Loyal Readers, chew on that and let me know what you think.
Posted by Dan at 10:36 PM

Oh Dan, you make me laugh so much. You better come visit again soon. Enjoy homeless life. And oh yeah, don't give up cycling for girls ever again. Remember that. We discussed it way back when...

So Dan, have you really been preparing for VOS by riding at only 15 mph?

piece of advice from someone across the Atlantic: BIKES WILL NEVER DUMP YOU!!

just like you I restarted cycling after my divorce and lost 24lbs straight away (which helped a lot with the climbs).

I now have a new set of (cycling) buddies with whom I go race MTB Marathons.

The one thing I learned in all of this was not to be affraid of beeing selfish. Cycling makes you feel good and is great for your health. You can't always say the same about girls.

Having said that, I hope you find what you're looking for.

(www.mularaiders.com - in Portuguese only, sorry!)

Wow, Dan. Drama indeed.
I didn't even know you were homeless, whose couch have you been crashing on?
As for the girl, any advise there would be entirely dependent on a few things. We should chat some time soon.

advice on THAT GIRL... well daniel scott nelson. no comment. you should have just "PAM"ed a long long time ago... back in nutrition and you would not have this problem today. 'nuff said. :D