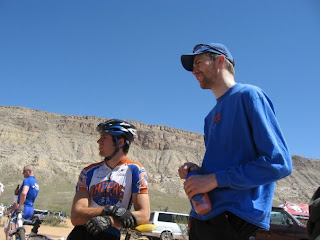 Racer and I after the race down at the Cholla Challenge in Huricane, UT
I have always been a roadie. I got my first road bike when I was 14. A 1996 all aluminum Trek 1400. It had some of the first Shimano STI shifters, and a killer "Fire Ice" red paint job. It was worth more than twice my first car I would end up buying a few years later, but it was worth every newspaper I had to wake up at 5 am to deliver to get it.

As time went on I got into racing. I have always owned a mountain bike, but never been a huge fan of the dirt. Rocks, roots, and ruts all kept speeds low and possibility of injury high. I loved the simplicity and speed of the road. So as I made the decision to start training to compete, I naturally gravitated toward road racing, and am about to start my third season as a dedicated "roadie"

I have been having serious thoughts about the whole road racing thing. Not that I haven't loved the last 2 seasons I've competed as a roadie, I've just found something new that is just a tad bit more fun...mountain biking.

I went down last week to Hurricane, UT for my fourth ever mountain bike race. The only 3 I'd done before were an Intermountain Cup Race in Draper last year, a Wednesday night Sundance race, and the 12 hours of Sundance race last September. My experience on the dirt is somewhat limited.

The only reason I even own a mountain bike now is because of cyclo-cross. I like to think of cyclo-cross as a "gateway sport", introducing roadies slowly into the world of off road biking. I never would have even gone off the road if it weren't for cyclo-cross showing me how much fun it can be rolling around in the dirt, grass, sand, and mud (oh, and snow...can't forget the snow)

Anyway, I now own three mountain bikes. (I never use two of them, if anyone wants to buy a full carbon fiber Gary Fisher Caliber, let me know, dang cheap, like under $350)
So last week, down in Hurricane I had an epiphany. As I was out on my second lap, all by myself for a bit, I realized something.....I was having fun. No one else was around, I had absolutely no idea what place I was in, but I was having a blast rolling through the rocks and sand and dirt. 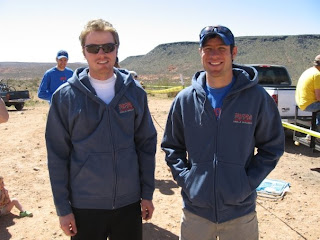 Kyle and I after the race. Look at how big our smiles are.
Road racing seems to be all about how much you can suffer. Mountain biking seems to be all about how much fun you can have while riding as hard as you can. Combine that with the fact that you basically have to red-line it for almost 3 hours, and mountain biking really is pretty dang hard as well.
(Being a roadie I wasn't exactly used to riding hard the whole time, just for sporatic bursts to chase down attacks and one big effort at the end)

Anyway, I am seriously rethinking my racing schedule this year...and it will definitely have more mountain biking, cause lets be honest, its really, really fun.
Posted by Dan at 8:08 AM

Have you done the stuff up AF Canyon? I love it up there.

That's funny--on our way up to Idaho this weekend, one of my teammates referred to mountain biking as the "gateway drug" that leads people to the road.

Anyways, I think you've got it backwards. Most cyclists I ride with (myself included), were mountain bikers long before we came over to the road.

Then again, maybe I ride with the wrong people.

You got the right idea son! To comment on the faceless ghost comment. I raced mtb to begin with then went road due to motocross injury and road racing has taught me nothing more than how to not have fun on a bike.

"how much fun it can be rolling around in the dirt, grass, sand, and mud (oh, and snow...can't forget the snow"

Were you talking about racin' or crashin'?

Chad, it's 'cross, so I would have to say both

oh but isn't it? I'm looking for a full carbon Gary Fisher Caliber with a on of those old Rock Shox FSX carbon forks. Do you know where I could find one? Preferably a single speed with Crank Bros. Mallets so I can ride with and sans bike shoes.

Hey, I remember you promising me being mentioned in your next blog post...I haven't seen it and now feel jipped!

Oh right, just quite because road biking is too hard, too painful. Well maybe I'll leave medical school too and try PA school because they don't take call.