An Awkward Start to an Otherwise Particularly Pleasant Day 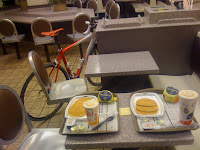 This photo has absoultely no relavance to today's post...Pictures just make blogs better
After gently waking to the soothing sounds of Beyonce 4 or 5 times (Cami, I'm telling you, you should replace the baby with an alarm clock with a snooze button...) I got up and left for school.

I didn't have anything too exciting planned for my day, so I decided to ride my cross bike to school. (I'm telling you, I think I've had a small glimpse into the life of a obscenely rich middle-aged man who gets to walk out to his driveway each day and finds himself forced to make the decision of driving the Beamer, the Audi, the Hummer, or the Toyota Carolla)


(Yes, Carolla's ARE a frickin' sweet ride any rich guy's car collection should not be without. I've got a vintage '94 model I'm restoring in my garage. Talk about hot/exotic/commonly underrated cars...) 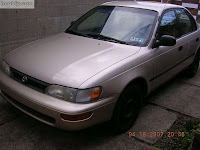 Anyway, the point of the above diversion, was to address/brag about the issue that on any given day, I have at least 5 different bikes I can choose to ride to school.

(6 If you count the tandem for those nights I feel like bringing a special lady friend home with me for a little....uh...um...ok so I'm not exactly sure what I would do if I ever got a girl over to my house, but I'll keep you posted when I do)

So anyway, I rode to school, rockin' all the way to the sweet sounds of some of my favorite artists. My current "ride to school" mix consists of my five favorite songs at the moment:

-Bonzo's Montreaux (one of the greatest drummers to ever beat around: John Bonham of Led Zeppelin)
-California Love (Dr. Dre/Tupac)
-You've Got a Friend in Me (Randy Newman version from the Toy Story soundrack)
-Beautiful Life Techno Remix (Ace of Base)
-Some Celine Dion song I don't know the name of, just how it goes

So right about the time Celine's singing so loud I swear her vocal cords are going to snap off her epiglottis, I see my buddy Rich. Rich is an avid cyclist, and one of the few people I know that genuinely loves riding bikes for the pure fun of it.

Rich seems to like mountain biking quite a bit, but this particular morning, he was riding his Bianchi road bike.

Now Rich has a very distinct bike. Bianchi has a green color they use for some of their bikes that only they use. Something kinda like this: 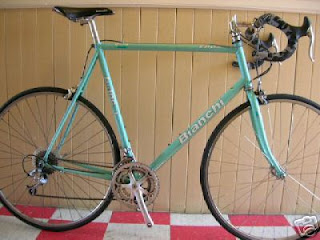 So you can see why it was so easy to spot Rich. It's rather easy to pick that bike out in a crowded street.

This all happened as I was turning north on 800 N at Brickoven, just south of BYU campus. Rich was about a block ahead of me, so I hustled my little hiny up to catch my good buddy and say hi.

As I got closer to Rich, I saw his bicycle messenger bag, one rather typical of an avid cyclist, such as Rich was.

I saw he also had headphones in, so I decided to signal my arrival with a gesture common in cycling and (I swear) completely "hetero": a light tap on the bum (in much the same fashion as a "good game" in any other sport)

As Rich turned around to face the attacking "bum swatter" I made a quick observation. This wasn't Rich at all, but some complete stranger who's bum I had just tapped!!

I realized at that moment that I had exactly 2 courses of action to chose from:

(I immediately ruled out the 3rd: pushing the impostor into oncoming traffic. That'd sure teach him to go around fooling people)

1) Stop and explain myself that I simply got confused and mistook him for someone else.

2) Take off and ride away from the situation as hard and fast as my legs could pedal.

Well, like any of you probably would have done, I did what any mature adult would do: I took off like a bat out of hell. I've never ridden so fast in my entire life.

I rode all the way up to the door of the building I was going to, too scared to stop at the bike racks, too scared to even look back to see if he was behind me.

I ran into the building with my bike, headed straight for my office, and shut the door behind me as fast as I could. As long as I couldn't see him anymore, it never happened...right?

The guys in my office, who are pretty used to my slightly odd behavior, didn't say a word. Garrett seemed to notice that I appeared to be in a hurry, (which is quite normal) and was actually at school BEFORE my first class was supposed to start (not very normal) I simply mentioned that I had a good story to tell him later.

In a nutshell, here are the life lessons/conclusions I've arrived at this week:

Since the incident I've though about ways to rectify the situation. I could:


Well, let me know. Vote for which option you think is best in the comments, or come up with your own. Thank you for the input.
Posted by Dan at 7:48 AM

Why am I reading your blog at 3am? Beside the point. I vote for option #1...continue with your awkward life you butt swatter! I can't believe you didn't say anything to him!!

PS-What made the rest of the day pleasant? Oh crappy, I just remembered you were mean to me on Thursday! I'm sure you reveled in my anger ;(

I agree. Start the trend.
Oh and that bike looks almost as good as those artificial wheat pancakes. Ya right. That bike is SOOO hot!

Artificial wheat pancakes? That's the best pre-race breakfast you could eat. Seriously, you have no idea how much thought went into that meal.

And Dan, does bum swatting earn you a UCA suspension, or did you just wimp out of HOTN?

I'm honored that you would go out of your way to touch my back side. I hope that this unpleasant experience doesn't dissuade you from touching my butt in the future.

First, I would forget the whole thing, and second I would do as I advised my dad after he pinched some lady's bum in the ward thinking that it was my moms...double check before the bum swat!

PS - I love that you listen to Celine Dion- I thought only 30 year old women like myself did that!

PS - Are you the one that stole our tandem out of the back yard?!

Brilliant! I think the secretary that sits outside of my office thinks I'm goofy now because I laughed out loud when I read it.