24 Hours in the Old Pueblo

Several months ago, and probably under the influence of heavy prescription medicine and/or NyQuil (probably a combo of both), Nails and I somehow talked ourselves into doing a 24 hour race...duo. I've suffered through a 24 hour race before, but that was on a 4 man team, and I think the word "suffer" is the only real solid memory I have from the experience.

The combination of having the slowest lap times, 941 MPH winds fold my tent almost in half so that the top was pounding my face like a spring loaded club while trying to sleep the night before the race, inhaling approximately 3 metric tons of dust, developing a wheezing cough that sounded like I'd smoked enough to keep Joe Camel in business myself the last 20 years, feeling nauseous enough to want to vomit after every Little Debbie Oatmeal Cream Pie I ate.....well, I think that pretty accurately describes my first impression of 24 hour racing.

Luckily enough for me, the guys on my 4-man team were fast enough to make up for my complete lack of 24 hour racing competency, pulled some sweet fast times, and got us on the podium. It was a magical moment.

It may have been in the aftermath of that event, after my brain had blocked the 23.5 hours of pain and and pleasantly remembered the .5 hours of positive happy time (I learned all about how the human brain can cause itself to "forget" or block super traumatic experiences in life as a "defense mechanism" in my Psychology 111 class at the Coug. Great stuff they're teaching over there at that fine institution. Its also where I learned important life lessons such as: any Mormon freshman girl will buy any male over the age of 21 any meal anywhere on campus, in exchange for 30 minutes of attention, or 10 meals for a diamond ring)....anyway, I am thoroughly convinced it was after some serious defense mechanics on my brains part that I agreed to do another 24 hour race...duo none the less.

Looking back, doing a 24 hour race in February is a great way to stay motivated to workout all winter. Granted you can only ride a bicycle in a garage for so many hours before you feel like your brain is either going to explode, implode, or just break up into petite morsels and fall out your nose bit by bit. So it forced us to come up with new training techniques.

My personal favorite December training secret was snowshoeing with a back pack full of diet soda (8 or 9 2-liters is just about right). Everyone should try this. (and by "everyone" I mean everyone with great medical insurance and a desire to grind away enough cartilage to require a double knee replacement within 4 months)

So we trained. We rode 12 hours of Temecula in January as a warm up/training ride 3 weeks before the big race and decided that just maybe we did have the mental characteristics to do a 24 hour race duo (and by "mental characteristics" I am referring to insanity, stubbornness, lack of rational thinking, and sheer stupidity)

Either way we rolled into Tucson, AZ late Thursday night, set up camp and slept with visions of night racing, dancing through our heads. Friday we got up, ate some hearty flap jacks courtesey of Tamer, and went out to preride the course. Relatively flat, nothing too technical, ideal for an ex-roadie like me who struggles with basic mountain bike maneuvers such as "turning".

Saturday we got up, complained about whatever we could find to complain about, tried to pretend like we weren't nervous, and got ready to race. Mark took the first lap and threw down a pretty fast time. Just fast enough to send me off in a hurry as I had a secret (and by "secret" I mean I pretty much told everyone) goal of my own to beat Mark's first time. 1 mile from the finish on my first lap I went through a rough and bumpy section that was just enough to bump my chain apart.

Visions of earlier in the week when I had not snapped the masterlink on my chain all the way, thinking to myself "it'll snap into place the rest of the way as I ride" ran through my head and I cursed my stupidity (not out loud, mind you, I signed the BYU honor code) I got off and pieced my broken chain together and ended up with a time just 2 minutes slower than Marks....about the time it took me to think of every BYU approved cuss word, get my chian tool out and fix the thing.

We continued on the first day, holding steady laps and into the night. Thanks to my dad who was at home watching the results on the internet, I got hourly texts telling us what place we were in. Climbing steadily through the night, we kept the laps steady and even started pulling up on the the first place team. By noon the second day we found ourselves a mere 12 minutes back off the first place team. Not bad after what ended up being 25 hours of racing. We took our 2nd place with pride 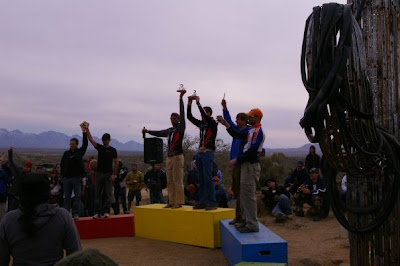 The trophies they handed out were pretty much the coolest things ever. But we didn't win, so we just got a cool ceramic tile. Hand painted. And a bit of cash, not bad. Definitely worth going for 1st next year.
Posted by Dan at 12:58 PM

hey dan - you don't know me, but I am writing up the Frozen Hog for Utah Cycling and wanted to get your input. Also, I think I might have a pic of you (or someone from your team) running the LeMans in Old Pueblo. e-mail me at heather.gilbert@hci.utah.edu.

Ex-roadie? Say it ain't so. Must racing on-road and off be mutually exclusive?