Thanks to everyone who participated in this years "Camp Nails" it was a huge success. And by success, I mean we got to ride our bikes all day long in shorts and short sleeved jerseys . The kind of days you can only dream about during Utah winters. My cheeks even got a little rosy from the sun. Talk about sweet times in the saddle.
Here's a break down of our intense training camp:

Day 1
Mark and I decided this year to raise the bar on our training camp with an opening day prologue up Woodland Hills Drive on road bikes. We were very aware that by starting such a tough camp with such an intense day would drive a few of the less dedicated riders away, but the point of Camp Nails has never been to coddle the weak. So Friday afternoon the group headed out for probably the toughest Day 1 in Camp Nails history. The group seemed to take the opening flats pretty well. We pushed the pace through Springville and really dropped the hammer in Spanish Fork. We were putting out more watts than the Provo Police Department puts out parking tickets in a whole month. We were laying down speeds fast enough to break the BYU Honor Code. (I haven't read it all the way yet, but I'm pretty sure there's a clause in there regulating how fast you can ride a bike)
Anyway, so we creamed through Spanish Fork with our average pushing at least 15-16 mph. (Probably closer to 16.7, but I really wasn't paying attention) We got to the base of the climb in record time and started the grind up. We knew the climb would be treacherous, but we forged on like truly dedicated cyclists.

Before I knew what was happening, Mark was out of the Saddle and rallying the group. I had no choice but to follow. I dropped a few gears and not only matched his attack, but launched a counter that completely left the group in the dust. I could feel the burn in my legs, but the suffering only pushed me on, giving me the motivation to go harder than I ever had before. As I settled down into a solid pace, my legs felt so strong and I felt so fast I had to actually check my computer to make sure that we were indeed going up hill and gaining elevation. I was on fire. So imagine my surprise when on one of the corners, I see the rest of the group only a bike length away. I could tell Mark was a little put out by my driving the pace so hard with so much of the climb left, but I didn't come to Camp Nails for a tea party and book club discussion, I was here to ride. So ride we did, all the way to the top.

As we reached the summit, a few of the locals were out to watch the finish. They were fully aware of all the glory on the line for whoever reached the top first. Knowing Mark as well as I do, I decided to play it out, and take advantage of one of his only weaknesses: Little Debbie Oatmeal Cream Snack Cakes. As we sprinted for the line I strategically pulled one from my jersey pocket and tossed it to the side of the road. Mark, being the predictable "always thinking with his stomach" typical guy he is, had no choice but to forgo his chance at eternal victory in the hill climb, and stopped to pick up the Little Debbie Snacky Cake.
Despite the questionable tactic employed on my behalf, I felt great about my victory as we started down the hill.

Overall a great group to ride with that day. Some serious hammer heads who drove the pace all the way home, but hey, I didn't get into this sport for fun. 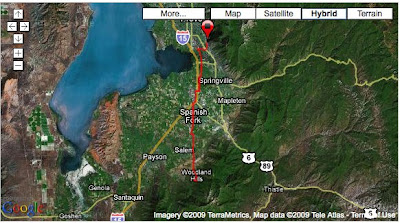 Thanks to all who made it to Day 1, a great opening to Camp Nails 2009

Day 2
For the second day we traveled a bit down to St. George, land of the eternal mountain bike trails, sunshine, and retirees in Lincoln Towncars. We headed out Friday night and ended up making the decision as a group to camp out at the parking lot/trail head of the area we would be riding. Despite the fact that we already had a paid reservation at a 26 star luxury hotel/penthouse suite in the business district of downtown St. George, we chose to camp on the dirt, so as to "become one" with the soul of the earth, in order to better improve our own individual spiritual relationships with the dirt we would be spending so much time riding over the course of Camp Nails.

Morning rolled around and as the dawn cracked, we packed up our things and waited for the sun to rise. Our day was to start at the very moment the sun crested the jagged horizon in the eastern distance. Or....maybe we slept in till 9. I really don't remember.


As we rode off, we decided as a group that this was to be the best day of riding ever. Or at least the best day that week.

We started by doing like 21 laps of Zen, give or take 20. We then headed back to the car to meet some of the less dedicated riders who didn't feel the need to get a jump on the day like the rest of us (OK so actually we just forgot to call them to let them know we were already there) and off we went to do several hours on the race course. After what seemed like 10 or 11 or maybe only 1 laps of the race course, we headed out for Barrel Roll and did a few loops out there. As I began to feel the pain of several hours of riding on some rather rugged terrain, I began to respect Craig and John for being total studs, riding on rigid single speeds. I tip my hat to you fellows.

On our way back we even had a little brush in with some celebrities. As we headed back from Barrel Roll, we saw THE Lynda and Dave. We figured they just hadn't ever gone home and had been out riding since last week's Camp Lynda. I tip my hat to you fellows.

After stopping by the car to replenish vital supplies, we headed out for another race course loop and Zen lap. We rode back into town with one last field sprint up a large hill, which, I don't know if you knew this or not, but I'm kind of a big deal, people know me, so I naturally rose to the occasion and once again won the sprint. 60% of the time, I win all the time. 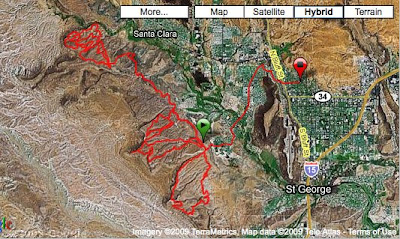 Overall it was a pretty sweet trip. Good friends, good times, and lots of riding. It seemed like such a hard training bout I could hardly believe it had only lasted 2 days. So while I'm now a broken man, trying to recover, I know I will be a better man for it when the racing season hits this spring. I mean in two weeks....

so much better than camp lynduh. next year free lil debra jerseys and snacky cakes. i hear lance is coming...

I was wondering what you two were doing at the top of the sprint while you were waiting for me. If I would have known you were making out with the cougarettes, I would have ridden faster.

By the way, I hear that the entrance fee to camp Nails is doubling next year. Nails is so full of himself now that he has a camp named after him.

I just posted some pics of Camp Nails over on my glob.