The Fates take a poop on Fast Dan

I am not a huge believer in fate. I like to believe that we shape our own destinies. (Or "densities" as George McFly would have us believe) However, I am thoroughly convinced that the 3 old ladies from Greek mythology that sit around and decide our fate had it in for me today.

First off, its March. The first day of spring has already happened. There have been days where the temperature only drops below 50 around midnight. So when I got up this morning and saw the temperature wasn't supposed to get above 40, I was a little dismayed. But only a little.

As I dressed up to ride I put on long tights and a jacket, thinking they'd be coming off as I climbed. The truth is I couldn't even feel my toes, hands, nose, or brain until the first climb. Fates 1, Fast Dan 0.

As I got to the Shoreline trail the sun started to come out. Started. But never really finished coming out. Totally psyched me out. Fates 2. Fast Dan 0.

As I got down to Springville and headed up the climb along Slide Canyon, the sun finally decided to come all the way out. And get warm. Very warm. Perfect for a long steep climb. By the time I got the top I was drenched with sweat. As I started down the descent the sun conveniently snuck back behind a cloud, resulting in a 50 degree drop in temperature, sucking all the fun out of the descent. Fates 3, Fast Dan 0.

About half way down the canyon I started feeling some stiff bumps in the rear. Sure enough the rear tire had gone flat. Not just a goat head or nail, but a nice tear in the sidewall. Of course it was too big and too much on the side for the Stan's to seal it up. So I pulled my spare tube out, patched up the torn sidewall and inflated the new tube. Sure enough, my spare tube had a huge hole in it. Total deucer for the fates; putting the running total at Fates 5, Fast Dan 0.

As I started walking down the canyon, my hands were too cold to even operate my phone. So I walked. And walked. Much like the Utah pioneers of old, except I did NOT sing as I walked and walked and walked. Just rocked out a little to Motley Crue. The pioneers would have definitely appreciated a little light rock. Fates 6, Fast Dan 0

After warming up a bit, Mark Johansen (I figure if he's gonna be a good enough friend to pick me up in the middle of the day I might as well spell his name right) answered my phone call and came to pick me up. He took me to the shop so I could fix my tire.

After fixing the tire I decided to try Provo canyon trails. As I got to the race course it looked like the sun was about to come out again. Psyche. After promptly hiding behind some dark mean looking clouds it began to snow. Then hail. Then snow. Then big hail. Then bigger snow. I just kept riding. I came to the conclusion that the Fates were now in full force, attempting to take the Fast out of Fast Dan, and I couldn't let that happen. So I kept on riding. Faster than ever. However the score continued to favor my opponents, Fates 7, Fast Dan 0.

The turning point finally came at about 4:00, as I rounded the top of Upper Frank and saw the altar. I hadn't seen it since early December. Three months was a long time. I got a little choked up. I had almost cried the day the big snow happened that sealed off the upper trails for an entire winter. It was like saying goodbye to a friend. And now he was back. The same tears that tickled my corneas 3 months ago were right there to welcome it all back. It was like NBA Jam, Tournament Edition, where you had those rad "Hot Spots" where shots were worth like 9 points. Basically seeing the view of Utah county from the altar was like being on fire and slam dunking from a half-court hot spot. Fates 7, Fast Dan 9. Take that old ladies. Bombing down Betty made the entire day worth it. Life is good. 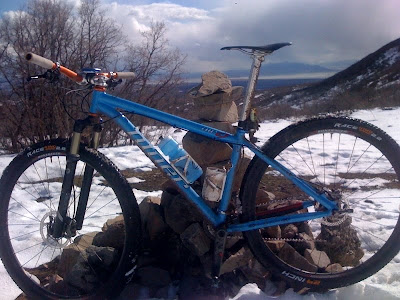 bichin camaro. Thats why youre fast, cause you still went out after getting a beat down. good for you.