"Somebody has a case of the Mondays"

-Note: The first person to name what movie that line is from, they *win a free (slightly used) Racer's Cycle Service water bottle and a mountain bike ride with me: The Phast Dan

-* I'm attempting to boost my number of readers and overall popularity by giving out free stuff. I hear it works well
So its Monday.

I normally don't have to be to work until 1:00 pm. So I normally don't even get out of bed until around noon. I know, rough life, huh? However, today (not so normally) I decided to be productive.

I got up at 7, showered, watched my roommates eat breakfast (I've decided that I'm not going to eat until April. I'm kind of giving up food for Lent. After watching 5'10", 120lb cyclists blow by me this weekend, I've decided that at 165lbs, I'm about 65lbs overweight. Chicks dig skinny guys, right? Maybe I'll start a new blog where I take pictures every day, showing how many ribs stick out of my chest in order to shame myself into getting down to my goal weight: 21lbs. ((yes, that is correct, I want to weigh less than my bike)))

So yeah, I finally managed to get to my office, start thinking about being productive (who really wants to outline the diagnostical differences between simple D.O.M.S. and full blown rhabdomyolysis anyway???) but all I could think about was mountain biking.

And well, since I'm supposed to be here in my office, and not off rolling around in the dirt, I just thought I'd write about mountain biking, since I told myself I'm not allowed to go until at least 10 o'clock this morning.... (only 37 more minutes to kill) 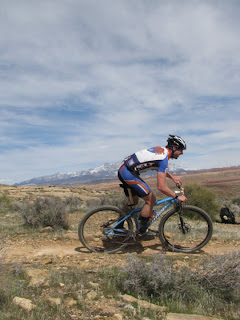 Here is a picture of me this weekend. The weather was perfect, the trail was great, and we all got to go race some bicycles, "yeah, baby"

OfficeSpace. I can't wait for my prizes.

Nice finish Mr Phast. You still look pretty skinny in the photo. Are you taller now, like, Chad Harris tall?

i knew it was office space too! i demand a prize as well.

Will it really improve your readership to give out USED prizes that you could get them for free anyway? Hmmm....how's that thesis? You can have my job when you graduate. I'm tired of working.