Crusher in the Tushar 2014 - Equipment Report

So here we are. A few months after building up the RLT.

My entire basis for becoming interested in building a disc brake road/gravel bike was in response to finally deciding to race the Crusher in the Tushar bike race down in Beaver, UT. I've had quite a few friends race it over the last 3 years its been going, and every single one of them, regardless of how they do in the race, seem to love it.

The Crusher is very well organized and quite challenging; two key elements to making any race fun. After watching the little promo video this winter, I became mildly obsessed with it. It spurred the building of the RLT (more on eventual frame choice later) along with my first serious and consistent training efforts since 2010.

It all paid off. I haven't had a race come together as well as the Crusher did in years. Like everybody else, I was nervous about anything and everything (including tires) right up until the morning of the start. However, the moment the gun went off, it was all about just spinning pedals and eating sugar. Two things I've gotten pretty good at over the years.

The following are some thoughts on the equipment I ended up using for the race. I'll post another writeup here shortly about the race itself. If anybody else finds it useful or entertaining, great. If not, feel free to go read a more useful blog about vaccines, autism, or Hobby Lobby's birth control policies.

I digress. Back to what's important.

After spending months planning out every meticulous detail of the bike I would ride in the Crusher, 3 weeks before the race I made some radical changes. I'd been planning on racing the RLT with a typical 2x10 setup that utlized a bunch of Force components I'd rounded up and an 11-36 XX cassette I'd had sitting in the parts bin since 2010.

However, after switching to a 1x10 setup on the cross country bike using a Sram X-9 Type II rear derailleur and a single Race Face wide/narrow chain ring up front, I was sold on the idea of running a 1x10 setup for the Crusher. I figured I'd lose a few gears off the top and bottom ranges, but after riding a single speed the last few years, I was no stranger to standing up to pedal when it got steep, or kicking the cadence up to 100+ rmp on flats and downhills.

I was hoping to find a 34t wide/narrow chainring in a 110 BCD for my compact cranks so I wouldn't have to lose any gears on the low range, but the smallest I could find was a 38t. When I put this together with my 11-36t cassette in the back, I ended up with very similar low end gearing as what a lot of other crushers with compact cranks and wi-fli rear derailleurs were getting with 34t little rings up front and 32t big cogs in the back. So I figured that was for the best as I'd need something a little taller than a 34x11 for the flats of Circleville. 38x11 worked out perfectly.

For tires I'd been hoping to ride some Panaracer Cross Blasters. They were very light (280g) and had a good, fast rolling profile. They had held up fine at low speeds on the dirt roads and gnarly single track I tested them out on around Utah County when I first got them. However, once I went down hill with any kind of speed and any amount of rock, they seemed to hold up as well as a rice paper windshield. After double flats on a Squaw Peak road attempt (hitchhiked home) and another set of double flats on Pole Line road (took 3 tubes with me this time), I decided to take the advice of a few other experienced Crushers and go with a pair of Stan's Ravens 35mm cx tires; and they worked beautifully. Rolled fast, gripped well, and didn't flat. Everything I could have hoped for in a tire.

As far as frames go, I was very very pleased with the RLT. The geometry was spot on. It felt stable on the flats, low in the corners (I loved how low the bottom bracket was), and could climb like any road bike I'd had. It even convinced me I wanted disc brakes on any future road bikes I build. However, when Niner released the news that they were going to start production on a sub 1000g carbon cx frame, I began getting greedy.

I figured I could lose over a pound and a half by switching to a carbon frame and a 1x10 setup.

I never guessed what would really happen by switching to a full carbon setup: total weight saved came out to be over 2.5 lbs. Not bad.

I ended up with a Felt F1X carbon cyclocross frame. It was a 1000g frame with a 480 g 3T fork. It didn't allow for as wide of tires as the RLT, wasn't as low as the RLT, and didn't have a metal frame like the RLT (I hit so much stuff on the dirt and fling so many rocks into my down tube, I've always been very hesitant to ride a carbon frame off road). But it WAS a butt-load lighter. And it WAS made of road-dampening carbon. And it handled like a dream. And it WAS a butt load lighter. Did I mention it was light? 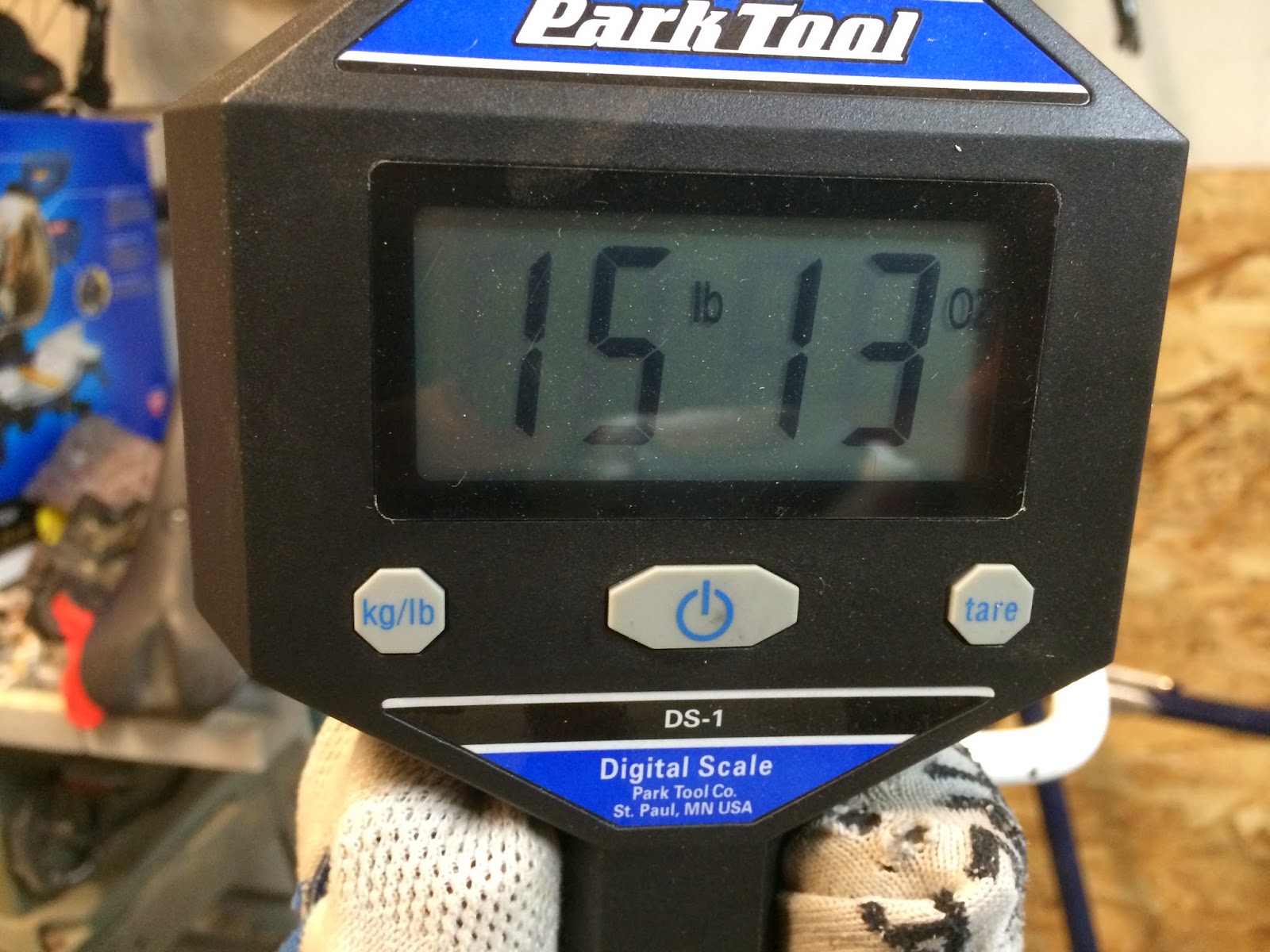 The total build came out to be under 16lbs. My previous build was really close to 18.5lbs. 2.5 lbs may not make a huge difference over the short 69 miles of the Crusher, but the psychological aspect of having a bike that light can be pretty advantageous.

The bike turned out perfect for the Crusher. Everybody says that at some point during the race you'll wish you had a different bike. There wasn't a single mile I wish I'd had a different bike. True, during the descent down the Col d'Crush it was bumpy, and I got nervous about flatting, but it would have sucked on any bike, even my xc rig with a 'spension fork and 2" tires. So I just enjoyed being able to hold on tight to the bars down in the drops while braking with one finger on the levers.

All in all, everything worked out perfectly. I realize that no matter what kind of equipment you run, things like flats and mechanicals can always happen. However, as far as choice of equipment, I'm pretty sure I've got my bike for next year already figured out...