Squaw Peak in a Basement 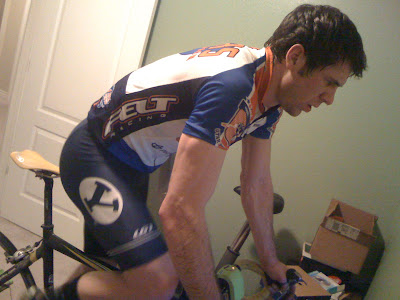 This may seem odd to anyone who is aware of a few key points
While the 3rd point actually has nothing to do with the ride, the snow did. You see, I actually rode Squaw in Aaron's basement.

I realize some of you may be thinking that I've taken this whole mental visualization concept a bit too far, but no, I really did climb 1600 ft over 4 miles.

My buddy Aaron recently started an intense training company where he goes to people's houses, tests their physical abilities, and helps them train for things like cycling, running, fly fishing, and even triathlon (Author's note: Triathlon currently ranks 41.2 notches below fly fishing on the "Scale of All-Time Coolest Sports")

Anyway, with this new business he's started, he has also acquired computer equipment you can attach to your bike while you ride inside which controls your resistance and such. After entering such vital information as your age, height, weight, marital status, and shoe size the computer can generate virtual rides.

(Shoe size actually has nothing to do with anything. Marital status, on the other hand changes the programming significantly. Due to immense decreases in physical fitness after marriage, the computer lightens all resistance by 94% to even it all up)

So of course we had to program in Squaw Peak. Granted it is all the work without any of the view, which is pretty much what makes the whole ride worth the pain, but that is besides the point.

The point is how cool it was to be virtually climbing a mountain in February.

To answer your next question, no, I did not break any records this time around. I know what you are thinking. Something along these lines:

"But Dan, you've been lifting weights all winter to the point that you have to find fat freshmen to sit on the leg press machine to get enough weight to actually get a workout. Shouldn't you be able to ride up Squaw with one leg faster than that Killer Hiller kid yet?"

To answer your thoughts, no. No, I can't. And to be honest, I probably never will. Kyle "Killer Hiller" will forever hold the Squaw Peak record between the two of us. For a while it bounced between the two of us, until that fateful Saturday afternoon back in October of 2006 when Kyle laid down a whopping 23 minute burn up the hill to beat my previous best by more than a minute and a half.

Needless to say he's held it ever since. However, now that's he's married he should try the computer simulation. With that "marriage bonus" he could quite possibly break the 20 minute mark...if he could just get his body fat back down to 3% (Since getting married Kyle's body fat has rocketed up to an obese 6%)

Either way, I hope the points of today's post are clear:
Well, I'm off to find a computer program that lets you set up virtual rides consisting of 24 miles of downhill.
Posted by Dan at 9:28 PM

Do you get to come back down? I'd like to see how fast you could come down with out ever having to slow for a turn... That is pretty rad, I rode the computrainer in the shop on trainer and it is a lot more fun than old school trainers. You should also try it riding it with my 143 lb. climbing weight. You could bust 23 minutes that way.... BTW, what was your time?

Split pea soup does have to do with something.... It has to do with that awful stench in our office.

if I remember the actual record set by Kyle is not valid due to a tire change...

did i ever tell you the story about when I went up early season when the gate was still closed and found some guy laying out naked in the parking lot? Now THAT was an awkward turn-around