A lot of big things have happened in the last few weeks. I'm gonna talk about them now, cause I guess that is what you do on a blog. 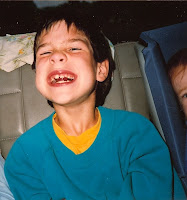 You can't have a blog post without some kind of picture, and I didn't have any good cycling ones from this weekend, so here's one from when I was 6.

A) We went down to Phoenix for the Valley of the Sun Stage race back in February. You can probably tell by the fact that I am just now mentioning it that I didn't win it. I finished mid pack in the Road Race (40th of 88 finishers or so) and a bit worse in the Time Trial (55th??)

I felt ok about my results because I have been riding quite a bit (10-15 hours a week) but have done almost no intensity, (and by "almost no intensity" I really meant "only 3 rides with any kind of speed work") so I didn't feel too bad. It's a long season and there will be plenty of time to ramp up the intensity.

2) I got my USCF upgrade to CAT 2. I was pretty dang excited, (and by "pretty dang excited" I really meant "insanely stoked out of my mind") about the upgrade. It's one step closer to my secret dream of being a pro cyclist.

Its kind of bittersweet, however. As bad as I've wanted to be a semi-pro, now that I've reached the status, I have to start racing/training like one. And to be honest, I'm not as fast in real life as I am in my dreams...

Pretty much I've got my work cut out for me this season, and nothing to lose, so I guess that means its time to rally.

D) We went down to Baker, CA for a race this last weekend and I had my first race as a Cat 2. I got dropped like a sack of bricks. What's worse, is that is was going downhill. Yeah, downhill. Who in the world gets dropped going downhill!!! Yet as we crested the hill and started the descent I just could not get up with the group...it was pretty embarrassing.

3) I think I'm still sick from a month ago. I just don't seem to be able to get rid of this sore throat. It comes back whenever I push it too hard. Maybe it's my wussy side telling me not to ride too hard...I don't know. All I know is that I wish it was warm outside, and that I could ride hard without feeling like my throat was going to burn a hole through my larynx.

G) I wish I didn't know what a larynx was. I have an anatomy test tomorrow and instead of studying for it, I am on here venting. I'm banking on the fact that my professor doesn't read student blogs, so when I go in tomorrow asking for an extension on the test, he won't know its cause I spent the night goofing off on my blog, instead of baking waffles for widows at the shelter like I'll probably tell him...

(just kidding, I go to BYU, abide by the honor code to the fullest, and have never lied)

[ok so the never lie thing might be a lie, but don't worry, I'm not going to lie to my professor, if he asks, I'll outright tell him I was wasting my night away on a blog instead of memorizing lower leg cutaneous innervations]
Posted by Dan at 5:17 PM

Don't worry Dan, getting dropped going downhill happens to everyone. It's like an official welcome to the next cat. Remember last year at Sea Otter?(you) Remember last year at
Wolf Creek?(me). If you really want some help...Get some more aero wheels than Race X Lites, and if you really want to be dorky, the Giro Advantages
are legal...Just keep thinking 45 seconds every 40k. They could make the difference.

Keep an eye on that throat (figuratively). I had a sore throat through most of the '07 season, and we both know how that turned out.

A Giro Advantage may be legal, but I'll stick my pump in your spokes if you show up at a road race wearing one.